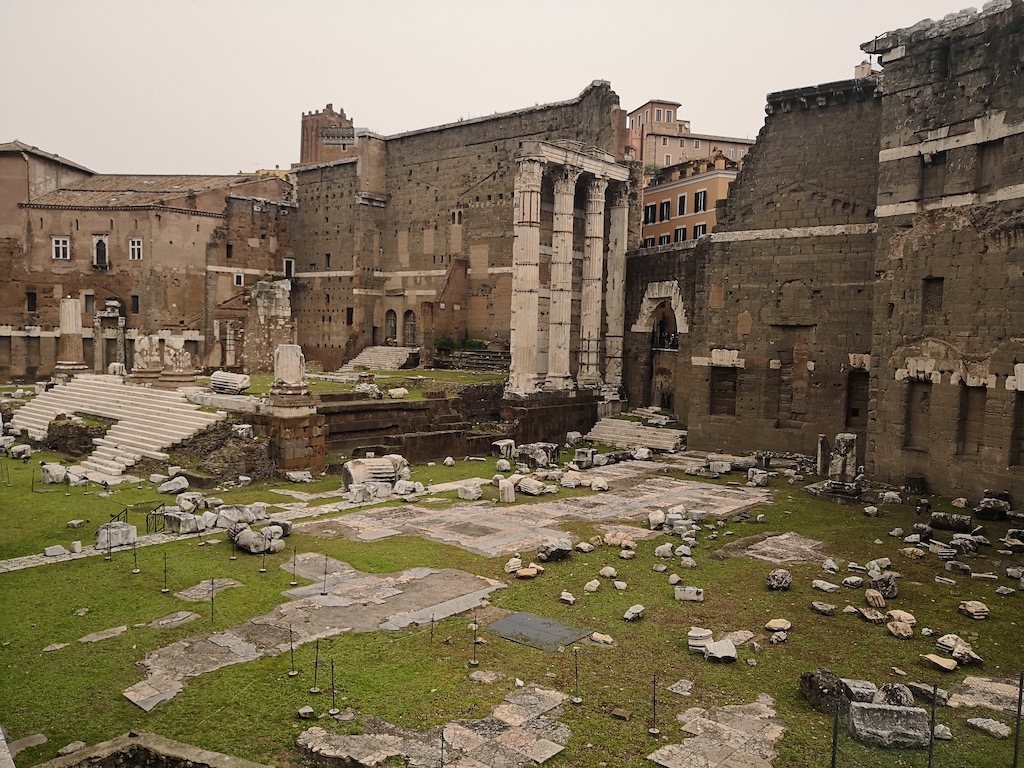 Considered the center of the political activity of ancient Rome, the archaeological area of ​​the Imperial Forums is the area that extends along the homonymous street between the Colosseum and Piazza Venezia, close to the Roman Forum and which, between 46 BC. and 113 A.D. saw the construction of the Forums of Cesare, Augusto, Nerva, the Forum and the Markets of Trajan and the Forum of Peace.

The Forum of Augustus 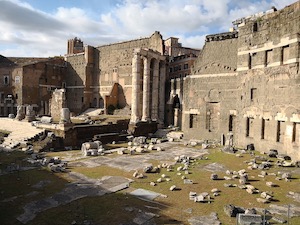 After the Forum of Caesar, which we talked about in a previous post, in 2 BC. the Forum of Augustus was built, placed perpendicular to the first and with the Temple of Mars Ultor which rested on the high wall (still well preserved) that separated the Forum from the popular Suburra district.

The temple was promised in vow to Mars Ultor (ie “Avenger”) on the occasion of the battle of Philippi in 42 BC, in which Octavian (at the time not yet Augustus) and Mark Antony had defeated Caesar’s killers and thus avenged his death.
The temple stood on a podium, about 3.5 meters high, covered in marble blocks and with eight Corinthian columns on the sides and in front and which was accessed via 17 marble steps. The cell ended at the bottom with an apse occupied by a podium that housed the statues of Mars and Venus.

Mars was the legendary father of Romulus, therefore the father of all Romans, and above all God of battles and soldiers. To make decisions, in case of war, then, or to celebrate a triumph, or to thank for a victory, the senate met in the temple of Mars Ultor.
There were also the ludi martiales, that is the celebrations dedicated to the God of war, or the ceremonies with ritual banquets of the ancient priestly order of the Salii.

In front of the temple there was a paved square of about 70 x 50 meters with a colossal statue of Augustus on the triumphal quadriga in the center, on whose base there was the inscription: PATRI PATRIAE (“To the father of the homeland”).
In total, including the exedras, the forum measured 125 x 118 meters.

The Forum was abandoned rather sooner than the others, and already in the 6th century it was demolished. In the 9th century, the church of San Basilio was built on the podium of the temple, in whose convent the knights of San Giovanni settled.
Today the three columns of the right side and part of the cell wall remain of the temple.

The Forum of Nerva

The Forum of Nerva was actually built by Domitian to unify the already existing Forums of Caesar, Augustus and the Temple of Peace in the irregular area left free.
The forum took this name because it was inaugurated after Domitian’s death by his successor Nerva.

The square of the forum, therefore, was narrow and elongated, 120 x 45 meters, with the temple of Minerva that dominated the western end and behind it the “porticus apsed”, the monumental entrance created for the access from the Suburra.

Until recently, practically nothing could be seen of the Forum, it was only around 1932 with the works for the opening of via dei Fori Imperiali that the two portions of the forum separated by the road came to light: the part, in the Forum Romano, behind the basilica Emilia and, on the other side, close to the forum of Augustus, a section of the perimeter wall with the “Colonnacce”, the two protruding columns with the relative attic.