April 21st is undoubtedly the most important day for Rome because it was on this day that, according to the legend, in 753 BC. Romulus laid the foundations on the Palatine Hill of what later became the capital of the world: Rome.

Also this year there are so many events, on the weekend of April 21st, to celebrate the 2771th anniversary of the Rome Foundation. 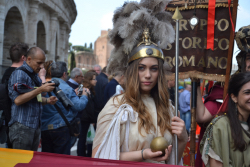 Starting from the XVIII Edition of Christmas in Rome organized by the Roman Historical Group that will come alive at 11.00 on Saturday 21 April at the Colonnade of the Pantheon with The Adventus of Emperor Adrian , the solemnization of the arrival
in Rome of the Emperor, who was in Antioch at the time of Trajan’s death and could enter Rome only in the following year (118 AD)
And then, exhibitions, meetings, performances and historical re-enactments at the Circus Maximus, from where the traditional procession will cross the Via dei Fori Imperiali and the Colosseum on the morning of Sunday 22nd at 10.30am.
And from 14.30 until 20.00, the whole area between via Petroselli and Piazza della Bocca della Verita ‘will be pedestrianized and will turn into a large open-air theater, with shows, concerts and street theater.
Event program

Powered by GetYourGuide. Become a partner.

At Pincio instead there will be ETERNA # 2771 Birthday of Rome , two days of music, show, fitness, street art, street food, karaoke, sounds, colors and … the spectacular launch of 2771 balloons in city ​​sky to celebrate his birthday.
Event program 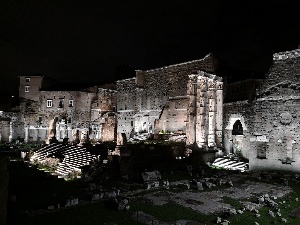 In addition to these events dedicated to the birthday of Rome, Saturday 21 April will also start other events that will go on for good part of spring and even throughout the summer.
Starting from Viaggi nell’Antica Roma , the beautiful multimedia show through the Fora di Augusto and Cesare, accompanied by the voice of Piero Angela, who after the great success of the past years is repeated this year too .
And that in the opening night will be ‘free entry (reservation required at 060608).
Timetables and tickets

From Saturday 21 April and until 17 June the municipal rose garden will be opened (free of charge) while at the New Fair of Rome, the Festival of the East, the Irish Festival and the Latin American Festival will be back until 1 May. and the Country Festival.

Finally, last but not least, throughout the day of Saturday 21 April, all the municipal museums and exhibitions (with the exception of “Magnum Manifesto” at the Ara Pacis Museum and “Canaletto 1697-1768” at the Museum of Rome ) will be open for free to all.
Complete program for the whole weekend from 20 to 22 April