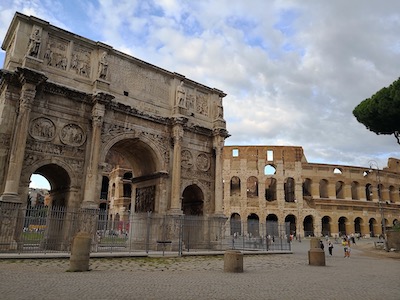 High more than twenty meters, the Arch of Constantine is one of the three surviving triumphal arches in Rome in addition to that of Titus (81-90) and Septimius Severus (201-202) in the Roman Forum.
Although based on excavations conducted in the foundations, it seems to have been built at the time of Hadrian, the arch was inaugurated in 315 on the occasion of the ten years of the reign (decennalia) of Constantine and dedicated by the senate to the emperor to commemorate the victory against Maxentius in the famous battle of Ponte Milvio on 28 October 312.

Located near the Colosseum, on what was once called Via dei Trionfi, at the beginning of the Via Sacra, the Arch of Constantine is 21 meters high, 25.70 wide by 7.40 m deep. It has three archways framed on the two facades by four columns, with the central arch, the largest, 11.45 mx 6.5 m high and with an attic of 21 mx 26 above it made of masonry and cementitious covered on the outside of marble blocks.

The reliefs are placed symmetrically on the two facades (facing north and south) and on the two short sides (east, towards the Colosseum and west) and, as is typical in Roman relief arches, war scenes prevail on the external facade (south) , while on the inner facade (north), facing the city, scenes of peace.

that is:
“To the emperor Caesar Flavius ​​Constantine Maximus, Pius, Felix Augustus, the Senate and the Roman people, because by divine inspiration and by the greatness of his spirit, with his army he claimed by means of just war the State as much from the tyrant and, at the same time, from every faction, they dedicated this distinguished arch for triumphs. “

The inscriptions above the lateral arches instead refer to the celebration of the decennalia and the wish for the vicennalia , that is the celebrations for the ten or twenty years of reign:
VOTIS · X · VOTIS · XX, on the north facade and SIC · X · SIC · XX on the south facade.

The inscription on the attic is flanked by a pair of reliefs from the time of Marcus Aurelius while the plates on the shorter sides are relevant to a frieze from the Trajan era.
Lower down, on the other hand, eight circular reliefs above the lateral archways, on both sides, are from the Hadrian period, are inserted two by two in a rectangular field that was originally covered with porphyry slabs and alternately depict hunting scenes and scenes of sacrifice to pagan divinities.

Above the lateral arches and under the Hadrianic roundels, a continuous frieze, just under 1 m high and which also continues on the short sides of the monument, tells the episodes of the war against Maxentius and the celebration of the victory of Constantine in Rome.
In particular on the short eastern side (towards the Colosseum), the scene shows the emperor’s entry into Rome on 29 October 312 while on the southern side the Battle of Ponte Milvio is depicted and you can see the Milvio bridge, on the far left, with a personification of the Tiber overlooking as Constantine’s soldiers pass between Virtus and Vittoria; then followed by the massacre and drowning of Maxentius’ cataphractrarii by the Constantinian cavalry and, on the far right, the trumpeters of the winning army who recall the troops.

The Battle of Ponte Milvio

The battle of Ponte Milvio marked the beginning of a new era for the entire Roman Empire and, probably, for all Western civilization.
It took place on October 28, 312 and put an end to the reign of Maxentius. Constantine, on the other hand, was triumphantly received in Rome and proclaimed the only emperor of the West.
He dedicated the victory to the God of Christians and, with the edict proclaimed in 313, he put an end to the persecution of Christians throughout the empire.
Under his protection, therefore, Christianity developed and the clergy always acquired new privileges.