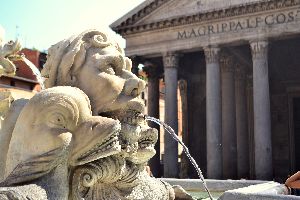 Rome is not only the Colosseum, the Trevi Fountain, the Pantheon or the Vatican Museums, but there are many other monuments, fountains, squares and streets full of centuries-old history, ranging from the Roman Empire to the Renaissance, up to the twentieth century.

The best and cheapest way to discover these places and learn about the history “inside” is to participate in these guided tours, where the fee for the guide will be decided by you at the end of the tour.

Ancient Rome historical Free Tour : This tour will be a walk through the most important places to witness all the historical, cultural and human heritage and legacy left by one of the oldest civilizations in the world. From the Capitoline Hill, the Palatine Hill, the Colosseum, the Imperial Forums to the Pantheon, and many other places, you will enter the heart of ancient Rome and its history.
Duration of the tour : 2.5 hours

The Rome of the Emperors between History and Legends : In this fascinating tour of Ancient Rome you will delve into the stories, intrigues, victories and defeats of the Roman Emperors, visiting the places they forged to exalt and celebrate the their exploits: from the Colosseum (external) and the Ludus Magnus, the place where the gladiators trained before clashing on the arena, you will walk along via dei Fori Imperiali where it is still possible to admire the remains of the imposing public and cultural areas created by Emperors, and then you will reach Piazza Venezia. The tour will end on the Capitoline Hill, where you can enjoy a breathtaking view of the Roman Forum.
Duration : 2.5 hours 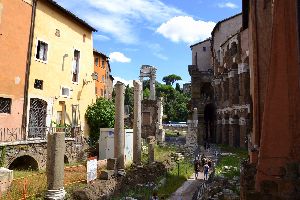 Trastevere, Isola Tiberina and the Jewish Ghetto : Alla discovery of some historic districts of Rome, where time seems to have stopped.
From Trastevere, ancient area of ​​residence of the Etruscan population on the right bank of the Tiber, to the Sacred Area of ​​Largo Argentina, crossing the Tiberine Island and the Jewish quarter, a district that was once considered one of the poorest and most unhealthy areas of the city although not without evidence of a glorious past and which today is one of the trendiest areas of the capital, frequented by both tourists and Romans attracted by the many restaurants serving the characteristic dishes of the Roman-Jewish cuisine.
Duration : 2.5 hours

The Rome of Popes: from Castel Sant’Angelo to the Vatican : The tour starts at Castel Sant’Angelo, once a monumental Mausoleum of the Emperor Hadrian later transformed into a fortress and prison of the Papal State, and continues along Via della Conciliazione towards St. Peter’s Square where you can admire the wonderful Colonnade of Gian Lorenzo Bernini before entering the most famous Basilica in the world where the guide will tell you about the long and complex history and will show you the treasures and relics preserved in this magnificent Basilica.
Duration : 2 hours and 15 minutes

The most interesting free events in Rome

Other guided tours in Rome