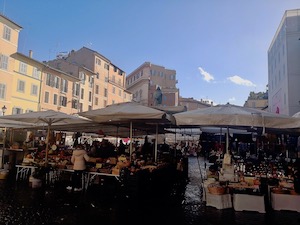 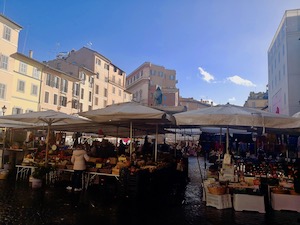 Campo de’ Fiori is a square in the historic center of Rome a few meters from Piazza Navona, so called because until the 15th century in its place there was a flowery meadow with some cultivated gardens.
It was thanks to its position, on the border with the Regola district and along the important route that led to the Vatican, that, in 1456, Pope Callixtus III had the square paved, as part of a broader project of reorganization of the entire district. Parione.
This meant that many important buildings were built in the area, including the Palazzo della Cancelleria (historical seat of the Apostolic Chancellery) and the palace of the Farnese family (since 1936, the seat of the French Embassy), bringing a large street to the square. you have prominent personalities, such as ambassadors and cardinals, and a certain well-being in the area. Hotels, inns and shops were built in the area and Campo de ‘Fiori became the center of various commercial and cultural activities.
It was then from 1869 that the square became the seat of a lively and picturesque Campo de’ Fiori Market .

Today, if every morning it still hosts the famous market, in the evening, especially during the summer season, Campo de ‘Fiori becomes one of the favorite haunts of the youngest thanks to the presence of numerous clubs and pubs.

The statue of Giordano Bruno

In the center of Campo de ‘Fiori stands, from 9 June 1889, the statue of the philosopher Giordano Bruno , burned at the stake for heresy, in the same spot, on 17 February 1600.
Work by the sculptor Ettore Ferrari, the statue was inaugurated in the presence of the Mayor of Rome Alessandro Guiccioli, despite the strong hostility of the ecclesiastical world and in the jubilation of all the professors of “free thought”.
On the sides of the monument you can see eight medallions with effigies of famous heretics, panels with scenes from the life of the philosopher and the significant writing of Giovanni Bovio: “ To Bruno the century he divined, here where the stake burned “.