Masquerade parades, frappe , castagnole and many shows will animate the last Carnival weekend in Rome.
In addition to the parades and fancy dress parties that, next Sunday 3 March, will color the streets and parks of the city, from San Lorenzo to the Quadraro, from the Luneur B> BioParco of Villa Borghese and Zoomarine , there will be, from Thursday 28 February until Tuesday “fat” at the theater Vittoria is the show of the illusionist Albero Giorgi, the only Italian artist recently called to be part of the cast of The Illusionists, the largest production of the genre in history. While Saturday, March 2, at Villa Grant, there will be the Gran Galà of Carnevale La Maschera di Roma where, with the costumes of the Ancient Rome, the Servants and Legionaries of Imperial Rome will welcome guests.

And then, there will also be Goldrake, Jeeg Robot and the other cartoons of the ’80s and’ 90s starting from Friday evening, March 1, will enliven the Roman Carnival evenings with the Ufo Rock Band , the great cartoon cover band that has more than 11 years again
on the premises of Rome and surroundings the initials of cartoons, famous films and dance music of the ’80s and’ 90s.
After the Friday evening at Stazione Birra, the party with them will continue the evening after while the last day of carnival, Tuesday, March 5, will be at Piper, the legendary local on via Tagliamento! 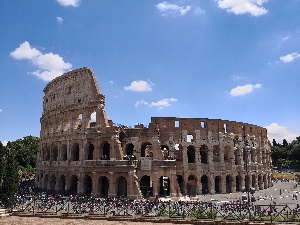 Also, this the last Sunday of the carnival coincides with the first Sunday of March and the appointment with #DomenicaalMuseo .
The Colosseum, Roman Forum and Palatine, then, together with the Capitoline Museums, Castel Sant’Angelo, the Ostia Antica, Villa Adriana and Villa d’Este and many other museums in Rome will be free admission throughout the day.
The complete list of open museums can be found on Official website of Rome Capital
As for the Colosseum, entry will be contingent and queues will be quite long, especially in the morning. We therefore recommend, if possible, to go in the afternoon (admission closes at 16:00).
For the Roman Forum and the Palatine, however, we recommend avoiding the entrance in front of the Colosseum because it is always the most crowded and use the entrance on Via di San Gregorio or the Largo Corrado Ricci, along Via dei Fori Imperiali.

Events and historical outline of the Roman Carnival