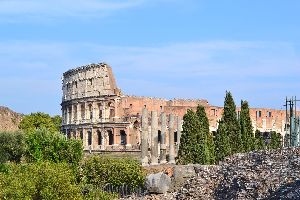 The original name of the Colosseum is Flavian Amphitheater , as it was built and inaugurated by the emperors of the Flavian dynasty, Vespasian, who began construction in 72 AD. and his son Tito who completed and inaugurated it in 80.

Uses of the Colosseum in history

Inaugurated, as mentioned, by Titus in 80 AD. (834 year of Rome), with celebrations that lasted 100 days, in the presence of the Emperor and a great multitude of spectators, the Colosseum hosted gladiator fights, hunts for wild beasts ( venationes ) and naumachia .
The fights between gladiators lasted until 405, when they were suppressed by Honorius following the death of the monk Telemachus who, to prevent the fighting, entered the sand and was killed by the angry crowd while those among the beasts lasted until around the middle of the VI century.

The darkest period for the Colosseum is, undoubtedly, the Middle Ages during which it was even considered one of the seven gateways to the underworld and it was believed that during the night the souls of the gladiators murdered in the arena wandered without peace between the arches and along the underground.
Indeed, the Esquiline, the closest hill and an unhealthy and therefore sparsely inhabited place, was largely occupied by cemeteries and mass graves, and where witches and wizards went, at night, to look for remains to be used for the preparation of potions and powders. .

The sinister fame of the Colosseum ended in 1675 when during the Jubilee it assumed the character of a sacred place in memory of the many Christian martyrs condemned to torture here and then in 1744 when Pope Benedict IV had the fourteen aedicules of the built. Via Crucis . Finally five years later, in 1749, the Colosseum was declared a church consecrated to Christ and the Christian martyrs.

The Marbles and Holes of the Colosseum Over the centuries, the Colosseum it has suffered numerous collapses due, above all, to earthquakes and, since the Middle Ages, the fallen boulders were used for new buildings while, starting from the 15th century, the Flavian Amphitheater became a real travertine quarry.
In fact, the material was taken from here to build Palazzo Venezia, Palazzo della Cancelleria, the port of Ripetta, the three arches of the second ring which fell after the 1703 earthquake, and the square and the loggia of blessings in San Pietro Vaticano.

Observing it closely, it is easy to see how the Colosseum is dotted with countless holes along its entire perimeter.
According to a legend they are the work of the barbarians, who would have made them and then filled them with poor people to blow up and destroy the monument but, considering the fact that at the time of the barbarians there was already gunpowder very unlikely, the theory according to which these holes were due to the grappas that the Romans used for the constructions and which had been hidden by the travertine slabs that covered the monument.