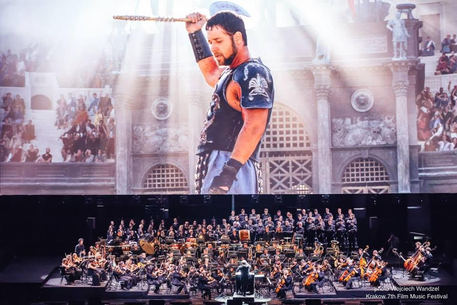 The Gladiator returns to the Colosseum. With the charity event of the Italian Film Orchestra and CineConcerts, in which for the first time Ridley Scott’s five Oscar movie will be screened with a soundtrack performed live in sync with the dialogues in the Arena of the Flavio Amphitheater.

And there will also be Russell Crowe in the flesh, now given a certain guest to the evening, which will have two performances, at the Circus Maximus on 8 and 9 June.
“We will bring back the Gladiator in his natural place and we will tell a historical period like the Roman Empire, which is at the foundations of the whole world – says the president of the Orchestra Marco Patrignani – For superstition I do not say 100%, but his presence is confirmed at 99% “.

With the maestro Justin Freer on the podium, 200 Orchestra and choir there a few inches from the front rows of the audience, the extraordinary participation of singer Lisa Gerrard (who with the main theme “Now we are free” won the Golden Globe) and the arrival of the composer Hans Zimmer, there will also be the former Giallorossi captain Francesco Totti.

The cost of tickets ranges from 1,500 to 3,000 € in the first rows with a guided tour of the underground and dinner at the Valadier Terrace by chef Cristina Bowerman.
More accessible the evenings at the Circus Maximus (6 thousand numbered seats and 25-meter screen): ranging from 50 euros in the Arcieri sector to the 250 of the Vip Experience Emperors.