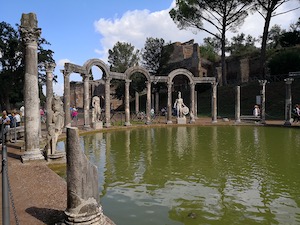 Archaeological evidence of the greatness of the Roman Empire, Hadrian’s Villa is located near Tivoli , about 28 km east of Rome. Wanted by the emperor Hadrian in an area rich in water and well connected to Rome (also reachable via the Aniene river), it was built between 118 and 138 AD. and it extended for about 120 hectares.
In addition to the imperial palace and the summer residence, in the villa there were palaces, baths, temples, barracks, theaters, gardens, fountains and nymphaeums and, in memory of Hadrian’s travels in the provinces, the monumental buildings reproduced places in other countries such as, for example, the Pecile which re-proposes the Stoà of Athens, the famous portico under which philosophy and science were discussed.

Today about 40 hectares remain from the ancient villa of Hadrian and, in addition to the aforementioned Pecile, it is possible to admire: the Canòpo, the Maritime Theater, the Large and Small Baths, the Antinoeion.

The Canòpo is the large pool around which an elegant colonnade ran (of which now only a part remains at the beginning) with copies of famous Greek statues which, being facing the pool and not towards visitors , create an enchanting reflection on the surface of the water.
At the end of the basin there is a large exedra where banquets were held, made spectacular by water effects and floating shows.
Its name is due to the fact that this structure evokes an arm of the Nile river with its delta, which connected the homonymous city of Canopus. 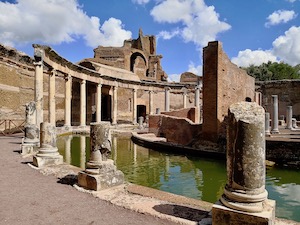 The Maritime Theater is one of the best known and most representative monuments of Villa Adriana and, begun in 118 AD, is one of the first constructions of the villa.
The building takes its name from a figured frieze in marble with a marine subject, which decorated the entablature and is circular in shape supported by Ionic columns and overlooks a canal in the center of which there is an islet of 45 m in diameter, composed it also has an atrium and a portico aligned with the entrance, plus a small garden, a minor spa complex, some rooms and latrines. The structure did not include any masonry bridge that connected the islet to the outside world, and to access it it was necessary to extend a short mobile bridge.

The Large and Small Baths are the environments where the imperial family, guests and staff in charge of the villas spent their days in the name of well-being, distinguished guests and the imperial family in the Piccole Terme, decorated with richness and refinement, the others in the Great Baths.

The Antinoeion is the place of worship dedicated to Antinous , the lover of the emperor Hadrian and deified after his death, whose remains came to light in 2003 along the access road to the Great Vestibule.

After the fall of the empire the Villa underwent various raids and for many centuries it was left in a state of neglect and used as a quarry for building materials and only at the end of the 19th century, when the Villa became part of the heritage of the Kingdom of Italy, the first systematic recovery works began, which lasted throughout the twentieth century, involving international archaeological specialists.

In 1999 Villa Adriana was declared a World Heritage Site by UNESCO.

Today the Archaeological Area of Villa Adriana is open to the public every day with the following sea bream: