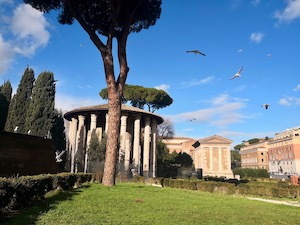 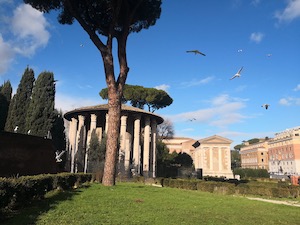 When Rome was founded, the Colosseum and the Roman Forum did not yet exist, the areas where they would later arise were initially marshes (even today the deepest conduits of the Colosseum are explored by diving underwater with cylinders).

In fact, Rome developed at the height of the Tiber Island, a strategic point for trade, transport and communications. This natural ford, allowing trade between the North and South of the region, has in fact favored the birth of various markets in the area: above all the Foro Boario for livestock and the Foro Olitorio for fruit and vegetables, while small communities lived in villages on low elevations which would then have been incorporated by the expansion of the city and passed down into history as the famous seven hills of Rome : the Campidoglio, the Quirinale, the Esquiline, the Viminale, the Celio, the Aventine and the Palatine. 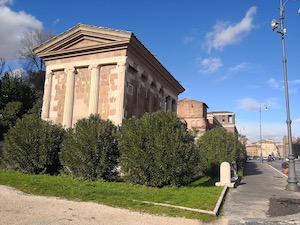 The Foro Boario is the large square around the church ( Santa Maria in Cosmedin ) where the Bocca della Verità is located and, since the beginnings of ancient Rome, housed the largest and most famous market of the city where, until the Republican age, the sale of livestock was held ( boario signidica di oxen).
At the time this area was occupied as far as the eye could see by a swarming mass of men and animals and, in the center of the square, a large bronze statue of a bull rose, a symbol of this place.

In the nearby Foro Olitorio, on the other hand, only fruit and vegetables were sold and the twin temples of Portunus and Mater Matuta stood at the foot of the Capitol.
While the god Portunus, to whom the first temple is dedicated, is the protector of ports and ports, Mater Matuta is the goddess of the Morning, therefore connected to navigation and to those who set out on a journey, therefore a cult widespread among sailors and merchants (many, in fact, brought offerings at the end of the journey as thanks for having arrived safe and sound) 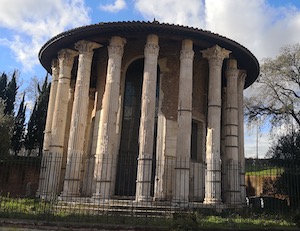 The other monument visible today at the Foro Boarium is the Temple of Hercules Victor , the oldest Roman temple and one of the most elegant archaeological remains on the planet.
It is the round building in front of the Bocca della Verità, a cylinder of twenty columns on which a conical roof rests and which houses, inside, the statue of Hercules, now lost.
Ercole was considered the patron of the guild of oil producers, also protector of trade and the transhumance of flocks, (confirming that its location in the Forum Boarium is not at all accidental) and the temple was built by a rich merchant ( Marco Ottavio Erennio ) that during one of his commercial voyages was attacked by pirates that he managed to defeat after asking for the protection of Hercules.