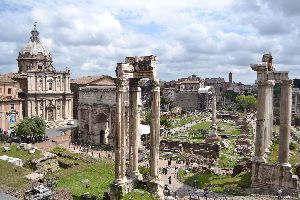 Apart from the Colosseum, the Imperial Forums, with the Palatine and Campitol hills, is the most important area of ​​Rome.

If the city was founded on the Palatine Hill by Romulus in the distant 753 BC. and the Roman Forum was the political, juridical, religious and economic center in imperial Rome,
the Campidoglio is today headquarters of the municipal council.

Enclosed between the Colosseum, via dei Fori Imperiali and, in fact, the Palatine Hill and the Campidoglio, the Roman Forum is one of the most beautiful and richest archaeological sites in the world where among the many ruins there are:
the imperial arches of Tito and Septimius Severus, the beautiful Temple of Antonio and Faustina, the evocative three remaining columns of the Forum of Caesar, the great Temple of Saturn, the majestic Basilica of Maxentius, the Curia, where the Senate of Rome met. Every corner of the Forum contains centuries of history and culture.

The ticket is the same as that to enter the Colosseum, so you can buy both on-site and online (only Skip the Line, Skip the Line + Audioguide) and lasts 2 consecutive days from the first use.
The first Sunday of each month admission is free (but without the possibility to book). 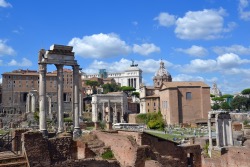 In addition to the standard ticket, the ticket S.U.P.E.R. (also available online without queuing) that with a small surcharge allows entry to the following areas otherwise closed to the public:

Beyond the road that connects the Colosseum to Piazza Venezia (via dei Fori Imperiali) there are the Forums of Augustus, Trajan, with the majestic column and the ancient markets.
the Forum of Nerva, of which only a small part is visible at the beginning of the Forum of Augustus.

Here, almost every evening from April to November, the beautiful multimedia show of the Travels in Ancient Rome is staged, where the deeds and daily life at the time of the two are reconstructed on the ruins of the Forum of Augustus and the Forum of Caesar. emperors.

Every first Sunday of the month, the extraordinary opening of the Fori Imperiali provides the entrance to the Trajan’s Column and, after the walkway with the Trajan’s and Caesar’s Fora, the continuation through the short walk in the Forum of Nerva, which allows to access the Roman Forum, through the catwalk built at the Curia by the State Superintendency.

There are five access points to the Forums:
The entrance on the Via Sacra, in front of the Colosseum, close to the Arch of Titus, from which however you can enter only if you already have the ticket.
The entrances, with ticket office, on via di S. Gregorio, the road that connects the Colosseum to the Circus Maximus and in Largo Corrado Ricci, on via dei Fori Imperiali
and finally the entrance from the Campidoglio, under the Arch of Septimius Severus and the exit on Via di S. Teodoro.

Of these, the entrance in front of the Colosseum is the most crowded, so, especially on Sundays free entry, I recommend using the entrance on Via del Fori Imperiali.

Representative office of the City of Rome, the Campidoglio is probably the most important of the seven hills of Rome given the importance it has always had for the city, mainly due to its proximity to the river Tiber.

In addition to the magnificent statue of Emperor Marcus Aurelius on horseback, in the middle of the square, the Campidoglio also houses the beautiful Capitoline Museums, where you can admire the legendary Lupa of Rome (tickets). 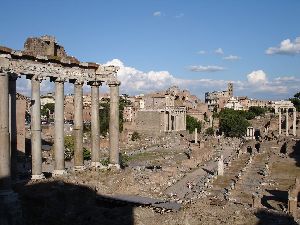 On the northern side of the Campidoglio, overlooking Piazza Venezia, there is also the Vittoriano, also called Altare della Patria, the National Monument to Vittorio Emanuele II that the Romans call vulgarly The typewriter for its very similar form, in fact, to the typewriters that were used once.

Do not miss the magnificent Basilica of Santa Maria in Ara Coeli, at the top of the long staircase that is next to the main climb to go up to the Capitol while it is literally breathtaking, overlooking the Roman Forum located on the right of the square.