The word Basilica was imported from Catholicism to indicate the largest and most important buildings of worship but in Roman times, the basilicas had no religious connotation and were used especially in winter, for activities related to the Forum , to the courts and to the economic operations that took place outdoors in the summer.

In the Roman Forum there are three large basilicas and, while the ruins of the Basilica of Maxentius are imposing and clearly visible from via dei Fori Imperiali, the Basilica Giulia and the Basilica Emilia only the bases of the columns and a few other remains remain.

It is located between the Curia and the Temple of Antoninus and Faustina and, having completely disappeared the Porcia basilica (the oldest), the Sempronia basilica and the Opimia basilica, the Basilica Emilia is the only surviving basilica from the republican era in Rome.
Raised in 179 BC by the two censors Fulvio Flavio Nobiliare and Marco Emilio Lepido, it was initially called basilica Flavia and then, being paid almost entirely by Lepidus, the senate decided to give the title to Emilio Lepido.
The current name, therefore, derives from the gens Emilia, who subsequently took care of the numerous restorations from 78 BC. to 22 d.c. under the emperor Tiberius.
The basilica was then destroyed by a great fire during the sack of Rome in 410 by Alaric and then, subsequently, to use the last remains for the construction of the Torlonia palace which stood in via della Conciliazione. 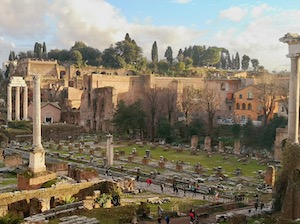 It is the basilica that flanks the piazza del Foro Roman, between the Temple of Saturn and the Temple of the Dioscuri, in the place where once there was the Basilica Sempronia, one of the oldest (170 BC).
The Basilica Giulia was started by Caesar in 54 BC. and inaugurated, still incomplete in 46 BC. It was then finished by Augustus after the death of Caesar.

The basilica measured a total of 101 x 49 meters, with the large central hall measuring 82 x 18 meters, surrounded on all four sides by a double row of porticos on brick and travertine pillars that formed five naves. The building was open on the northern side towards the square, where there was a further wing of a pillared portico in the center of which was the main entrance, located on the long side of the building, characteristic of the Roman basilica (as opposed to the Christian ones which had the entrance on the short side).

Today only the podium remains of the great basilica of the time, which stands on some steps where the remains of the flooring and some semi-columns are preserved.

The Basilica of Maxentius 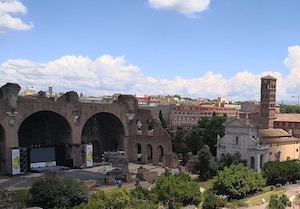 Located on the Velia hill, the basilica of Maxentius in reality, it is not part of the Roman Forum proper.
It is the last and largest civil basilica, begun by Maxentius in the early 4th century and completed by his victorious rival Constantine.

The gigantic building, of which only the northern side remains today, measured 100 x 65 meters with a wider and higher central nave with a base of 80 x 25 m. On the central nave there were three large niches on each side, covered by a barrel vault with octagonal coffers still clearly visible in the surviving part. The rooms were connected to each other by small arched openings.
On the short western side, at the head of the central nave there was an apse where a 12 m high colossal statue was placed, originally depicting Maxentius himself and later reworked with the features of Constantine I. On the short eastern side there was the entrance to the building, preceded by a staircase, which gave access to a transverse corridor open to the central nave by means of five arched openings.

The building partially collapsed with the earthquake around the middle of the 9th century but above all the basilica was used as a quarry for materials for the new papal constructions, such as the gilt bronze plates that covered the roof, which Pope Honorius I removed in 626 to decorate Saint Peter.