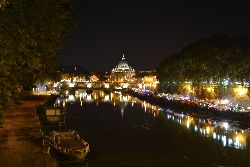 With the arrival of summer in Rome, many events have begun in the Capital that enliven the evenings of Romans and tourists, giving life to what has been officially called Roman Summer for some years now.

The most fascinating and evocative event is certainly The Moon over the Colosseum , or the possibility of visiting the Colosseum and its dungeons in the evening, far from the crowds of the day and with the charm of night lights. (Tickets)

A “classic” by now of the Roman summer is then the marvelous Journey into Ancient Rome , that is the multimedia shows at the Imperial Forums of Augustus and Caesar where the spectators are accompanied in Ancient Rome through multimedia reconstructions on the ruins Roman and the splendid voice of Piero Angela who acts as a guide. (Tickets)

In Rome, come back like all summers, the stands and stalls along the Tiber with Lungo il Tevere 2019 , the books with the Letture d’Estate in the gardens below Castel Sant ‘ Angelo, the theater at Villa Borghese with the reopening of the Globe Theater , the swing and the tango at the Village Celimontana , the Opera at the Terme di Caracalla and the cinema in the many arenas scattered in the districts of Rome, including the festival organized by the boys of Piccolo America which this year also brings quality cinema to Trastevere, to the Porto Turistico di Ostia and to Casale della Cervelletta.