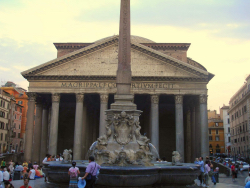 Completely rebuilt by the emperor Hadrian between 118 and 125, after the fires of 80 and 110 AD, the Pantheon was founded by Massimo Vipsanio Agrippa, son-in-law of Augustus, in 27 BC. and dedicated to all planetary deities.
It is for this reason that it is called Pantheon, which in Greek means, in fact, “of all the Gods”.
The large Latin inscription with bronze letters that strikes you as soon as you see the Pantheon is M.Agrippa L.F.Cos. Tertium.Fecit , ie “ Marcus Agrippa, son of Lucio, consul for the third time, built “.
An inscription that dates back to the first version of the Pantheon but that Adriano wanted to keep in its reconstruction.

Today the Pantheon is a real church, called Santa Maria della Rotonda or Santa Maria ad Martyres , as at the beginning of the 7th century it was converted into a Christian basilica, allowing it to survive almost intact the spoliation inflicted by the popes, during the Middle Ages, on the buildings of classical Rome.
Starting from the Renaissance, then, as in all churches, burials were also made in the Pantheon and in addition to illustrious artists such as Raffaello Sanzio or the musician Arcangelo Corelli, the Basilica Santa Maria ad Martyres houses the tombs of the two first kings of Italy, Vittorio Emanuele II and his son Umberto I.

What amazes the visitor to the Pantheon is its extraordinary structure, the contrast between the square entrance adorned with 16 columns 13 meters high, typical of temples, and the immense rounded space of the interior typical of the thermal buildings in Ancient Rome.
And, above all, its immense dome, the largest ever built in masonry, still the largest dome in the world, surpassing both the dome of San Pietro, and Brunelleschi’s dome in Florence, which withstood 2000 years of earthquakes.

According to the legend, thanks to the presence of the oculus on the dome, about 9 meters in diameter, astronomical phenomena can be observed inside the building, so much so that it has been defined by some as a “solar temple”, and on 21 April, Christmas of Rome, at noon, a ray of sunlight penetrates the oculus inside and hits the access portal.

The Pantheon is open for free every day from 9.00 to 19.00, with last admission at 18.30.
However, it is advisable to take an audio guide (here) that helps you to better know what you will see during the visit.

Other monuments, churches and places to see in Rome