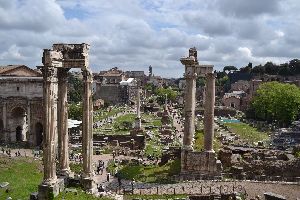 The Roman Forum is the archaeological area enclosed between the Colosseum, the Capitoline Hill, the Palatine Hill and via dei Fori Imperiali and is the place that until the fall of the Roman Empire and the advent of the Middle Ages represented the political, economic and social center From Rome.
And this is why today, on the sides of via Sacra , the road that crosses the Forum from the Colosseum to the Campidoglio, there are temples, arches and basilicas and ruins that recall Rome’s glorious past: em> Curia to the Basilica of Maxentius , from the House of the Vestals to the Temple of Venus and Rome , from the Temple of Romulus to the Basilica Giulia up to the imperial arches of Titus and Septimius Severus.

The Temple of Saturn and the Arch of Septimius Severus 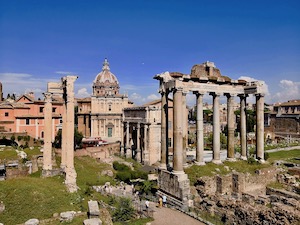 Overlooking the Campidoglio you can enjoy probably the most complete view of the Roman Forum, as well as one of the most beautiful views in the world, with the Colosseum at the end of the Via Sacra, behind the Church of Santa Francesca Romana and, in the foreground on the left the three columns of the Temple of Vespasian and the great colonnade of the Temple of Saturn with the Church of Santi Luca e Martina , the Curia and the Arch of Septimius Severus behind it.
The Temple of Saturn , inaugurated around 500 BC, is the oldest sacred place in Rome after the Temple of Vesta and that of Jupiter and owes its name to the fact that an ancient statue of Saturn, internally hollow and filled with oil, with its legs tied with woolen bandages that were untied only on the occasion of the Saturnalia which was held from 17 to 23 December.
The temple kept the state treasury, managed by the quaestors, the state archives and a balance for the official weighing of the metal. 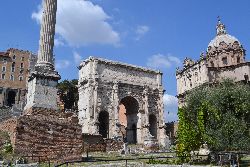 The Arch of Septimius Severus , the oldest arch in Rome, is a triumphal arch 23 meters high, 25 meters wide and 11.85 meters deep, built between 202 and 203 and dedicated by the Senate to the emperor to celebrate the victory over the Parthians in the military campaigns of 195 and 197-198.

It consists of three archways, with a central passage and two smaller lateral ones with four large panels that occupy the space on the minor archways, where the narration of the campaigns of Septimius Severus in Mesopotamia is carved, and the following inscription on the two sides of the top attic:

that is, the dedication to Septimius Severus and his sons the year following his return to Rome (202) after many years of struggles and travels for the re-establishment of Roman unity and the extension of the empire.

The Temple of the Divus Vespasian 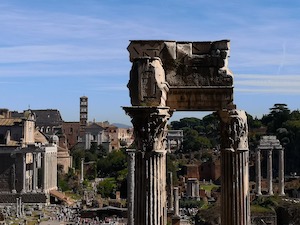 Founder of the Flavian dynasty, Vespasian was the ninth emperor From Rome. Ruled from 69 AD. in 79 and 72 the construction of the Colosseum began.
Begun by Titus and completed by Domitian, the temple was dedicated to Vespasian, deified after his death in June 79.
Leaning against the Tabularium on the slopes of the Capitol, it was 33 meters long and 22 meters wide.
What remains today are the three large angled columns, 15.20 meters high, holding a fragment of the architrave on which, in addition to a frieze representing sacrificial instruments, there is a fragment of the inscription which then allowed to identify the temple :

And this is only a very small part of everything that is contained in this wonderful archaeological area which is the Roman Forum.