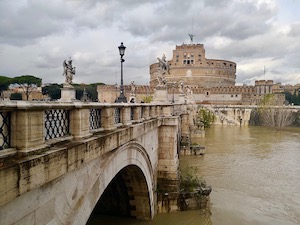 One of the most fascinating monuments in Rome, from a mausoleum for the emperor to a fortress and then a prison, up to today’s museum, Castel Sant’Angelo has stood on the Tiber for almost two thousand years!

It was in fact the emperor Hadrian, in the 2nd century AD. to have it built as a mausoleum, or rather as a building to house his remains and his family (hence the other name by which he is known: Mole Adriana ). The Mausoleum, during its function, housed the remains not only of Hadrian and his wife but also of the emperors Antonino Pio, Marco Aurelio, Settimio Severo and Caracalla. 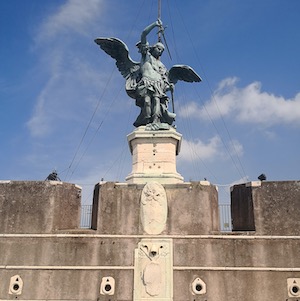 It was then in 590 that the building took on the current name of Castel Sant’Angelo when, according to tradition, the archangel Michael appeared to Pope Gregory the Great on top of the Mole Adriana while shoveling his sword. A sign that was interpreted as the imminent end of the epidemic as it actually happened.

Over time, then, given its proximity to St. Peter’s Basilica, the castle was established as a papal residence and fortified with the construction of the four bastions dedicated to the saints of the Evangelists, while many rooms inside the castle were destined for prison. .
The trials were carried out in the Hall of Justice while the executions generally took place outside the castle, in the square beyond the Ponte Sant’Angelo,
Among the illustrious prisoners held in the cells of Castel Sant’Angelo we find Benvenuto Cellini , Beatrice Cenci and Giordano Bruno .
The Hall of Justice and other rooms intended for the prison can still be visited today, as well as the beautiful Sala Paolina or the Cortile dell’Angelo. 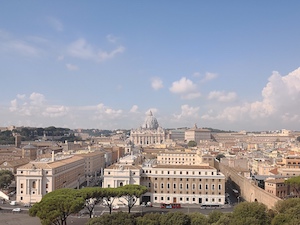 Entering Castel Sant’Angelo today , therefore, is a bit like retracing the history of Rome, from the splendor of the Empire to the temporal power of the Church in the darkness of the Inquisition, up to the present day , when the castle became a museum. Among the five most visited museums in Italy.
But a tour to Castel Sant’Angelo also allows you to go up to the terrace where the statue of the Angel is located and enjoy a breathtaking view over a large part of the city of Rome.
In addition to the Tiber that flows below, you can see: the Palazzaccio (the Palace of Justice), the Altare della Patria, the Pantheon, the Colosseum and, above all, connected to the castle via the Passetto di Borgo, Saint Peter’s Church.