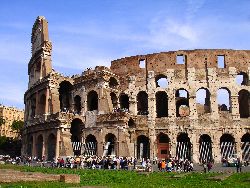 Rome is not only the Colosseum, monuments and museums. Rome is also churches, squares and fountains, it is no coincidence that the historic center of Rome has been included among the UNESCO World Heritage Sites since 1980.

For this reason, even when all museums, exhibitions and monuments are closed to the public, it is still possible to fill up on history, culture and beauty by visiting Rome.

The Colosseum and the Imperial Forums

Even looking at it from the outside, the Colosseum is a marvel. You can see the door through which the gladiators entered, the remains of Ludus Magnus , the gymnasium where the gladiators lived and trained, the great Arch of Constantine with the base next to it where once there was the Meta Sudans , the fountain where, according to legend, the gladiators went to wash themselves after the fighting. 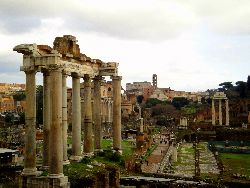 In front of the Arch of Constantine begins the Via Sacra, climbing which you can admire the Roman Forum on one side and the Colosseum, in all its magnificence on the other.

Once you have visited the area surrounding the Colosseum, you can go along via dei Fori Imperiali at least up to Largo Corrado Ricci where two splendid views open on the sides, on the Foro di Augusto and on Traiano on the right and on the Forum of Caesar on the left.
You can then decide whether to continue to Piazza Venezia where you can climb the Altare della Patria or go up the ramp leading to the Campidoglio from which to admire the wonderful panorama of the Roman Forum with the Colosseum in the background. .

Between Piazza del Popolo and Piazza Venezia, with a simple and quiet walk in the historic center of Rome you can admire: Trevi Fountain , the Pantheon, the stairway of Trinità dei Monti in Piazza di Spagna, the splendid Fountain of the Rivers in Piazza Navona, the archaeological area of Largo Argentina and from here, crossing Via delle Botteghe Oscure, the beautiful Fountain of the Turtles in Piazza Mattei.

Here, you are already close to the characteristic Jewish Ghetto where the ruins of the Theater of Marcellus and the ancient Portico d’Ottavia intersect with the memories of the persecution of the Jews in the first half of the twentieth century.

From Piazza Navona, on the other hand, proceeding southwards, you arrive at Campo de’ Fiori where, in addition to the characteristic market (every morning), stands the suggestive statue of Giordano Bruno while, from Piazza del Popolo, on the other hand, you can go up to the Pincio terrace from which to admire a beautiful view of Rome with the dome of St. Peter in the background.

St. Peter and the Vatican

When the Sistine Chapel and the Vatican Museums are closed to the public, you can still visit the beautiful St. Peter’s Square, with Bernini’s Basilica and colonnade.
Walking along the wide Via della Conciliazione (almost all of it is a pedestrian area) you reach the Lungotevere, at the foot of Castel Sant’Angelo, where you can admire what was once the Mausoleum of Hadrian.

From here you can go and see the nearby Borgo Pio, the road commissioned by Pope Pius IV in 1656 that connects Porta Castello to via di Porta Angelica, or cross the Sant’Angelo bridge and visit via dei Coronari, so called for the numerous sellers of sacred objects along the way.