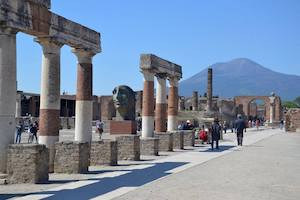 Declared a World Heritage Site by UNESCO in 1997 and, in recent years, the most visited archaeological site in Italy after the Colosseum and the Imperial Forums, Pompeii is a unique place in the world, where you clear feeling of taking a trip back and exploring a typical city of ancient Rome.

The violent eruption of Vesuvius in 79 AD it wiped out an entire population by delivering the largest and best-preserved ruins of an ancient Roman city to posterity.
In an area of more than 50 hectares you can admire fountains, public baths, private houses, brothels, taverns, commercial activities, an amphitheater and the remains of an important aqueduct. In addition to the beautiful Temple of Apollo, the most revered deity of Pompeii at the time.

Every day there are long lines of tourists at the entrances, so the best way to visit the excavations is to take the tickets online before reaching Pompeii.
If you want to make a complete visit to find out how people lived under the Roman Empire, it is advisable to book this guided tour of about 2 hours

Pompeii is located under Vesuvius, on the splendid Amalfi coast overlooking the Gulf of Naples. It is easily reachable from Rome in about 2 and a half hours by car or by taking the train to Naples and then from here with the Circumvesuviana train directed to Sorrento, getting off at Pompei Scavi (Villa dei Misteri).
Otherwise you can book this round trip bus trip from Rome which, in addition to the trip in a modern bus (with air conditioning and wifi) to Pompeii, includes the Skip the Line ticket and an audio guide to better visit the excavations.