The Imperial Forums are a series of monumental squares adjacent to the Roman Forum, built, during the first century, by Julius Caesar and the emperors Augustus, Trajan and Nerva, and whose remains, today, are crossed by the road that takes its name, in fact of, via dei Fori Imperiali.

The Forum of Caesar

The first to be built was the Forum of Caesar, inaugurated in 46 BC. shortly before his death but probably completed later by Augustus. 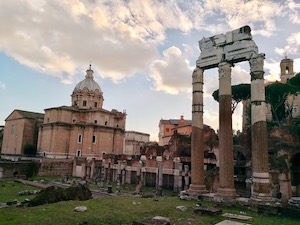 It consisted of a large rectangular square surrounded on three sides by a double portico and, on the south-western side, closed by the temple of Venus Genetrix, dedicated by Caesar to the goddess Venus during the battle of Farsalo and progenitor of the gens Iulia, of which today the three large columns standing on the slope leading to the Capitol.
In the center of the square was the equestrian statue of Caesar, on a horse with front legs in the shape of “human feet” like the famous Bucephalus, the horse of Alexander the Great, to which Cesaree was assimilated in this way.
The south-eastern side was open on the Argiletum , an ancient road that ran through the popular district of the Suburra up to the Roman Forum (corresponding to the current via Leonina and via della Madonna dei Monti) before, with the erection of the Forum of Nerva, the colonnade was incorporated into the enclosure wall.

The Forum of Trajan

The last to be built and also the largest and most monumental of the Imperial Forums is certainly the Forum of Trajan, built by the emperor with the spoils obtained from the conquest of Dacia (101-106) and inaugurated in 112 AD.
Arranged perpendicular to the Forum of Augustus, the monument was 300 meters long x 185 wide and, in addition to the square, included the Basilica Ulpia, the porticoed courtyard with the great Trajan’s Column and two libraries. 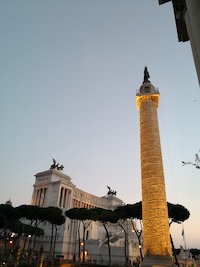 The Trajan’s Column is certainly the most important monument of the Forum and is clearly visible today by citizens and tourists with its approximately 40 meters high (39.86 to be precise).
Erected to celebrate the conquest of Dacia, the most important moments of the war are represented in relief along the column, from the most salient scenes of the battles to those of troop transfers and the construction of camps.

On the side of the base towards the Basilica Ulpia there is an epigraph that testifies how the column represented the height of the saddle between the Quirinale and the Capitoline Hill before the excavation work to complete the Forum and, under the epigraph, there is a door that leads to the cell where the ashes of Trajan and Plotinae were placed and where the spiral staircase of 185 steps begins to reach the top, where there is the bronze statue of St. Peter placed by Pope Sixtus V in 1587 in place of the original statue of Trajan. 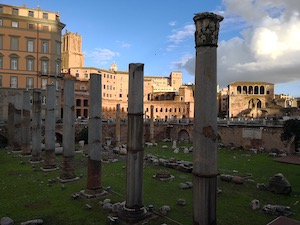 Only the central section visible today, with the western apse hidden under the road in via dei Fori Imperiali, the Basilica Ulpia was then the largest basilica in Rome.
Built between 106 and 113 AD, in fact, it measured 170 meters in length by 60 in width divided inside into 5 naves, with the largest, the central one, surrounded by 96 columns and, on the short sides, a third row of columns that separated the naves from two semicircular apses.
In addition to the forensic and commercial functions, in the basilica there was also the activity of tampering with the slaves, that is the liberation of the servants from the condition of slavery by their owners. 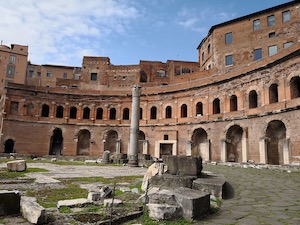 They are a complex of buildings built at the same time as the Trajan’s Forum to occupy and support the cutting of the slopes of the Quirinal hill, which was made to build the Forum.
Semicircular in shape corresponding to the exedra of the Forum, the complex was used above all for administrative activities connected to the Imperial Forums in addition to commercial activities, such as the presence of numerous rooms in the form of tabernas may suggest.