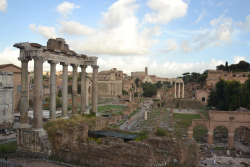 Looking at the Roman Forum from the terrace of the Campidoglio, in addition to the temple of Saturn in the foreground and the Colosseum in the center, at the foot of the Palatine, the three large columns of the Temple of Càstore and Pollùce are clearly visible, with, behind them, the Arch of Titus.
On the left, however, we see the colonnade of the Temple dedicated to Antoninus and Faustilla next to the circular building of the Temple of Romulus.
Closer instead, the pavement with the remains of pillars and semi-columns that reaches under the three large columns, is all that remains of the Basilica Giulia, begun by Caesar in 54 BC. and inaugurated shortly after his death by Augustus.

Càstore and Pollùce are two characters from Greek, Etruscan and Roman mythology, also known as the Diòscuri or “sons of Zeus.
According to the legend, in the course of the battle near Lake Regillus, in 499 BC, of the Romans against the Latins allied with Tarquinio the Superb in an attempt to recapture Rome, two mysterious knights appeared who led the Romans to victory. Immediately after, the same knights were seen watering the horses at the Fonte di Giuturna and announced the victory in the city, only to disappear soon after.
The people recognized the Diòscuri in them and the dictator Aulus Postumius Albino vowed to erect a temple in their honor, which was dedicated by his son in 484 BC.

The Temple of Antoninus and Faustina 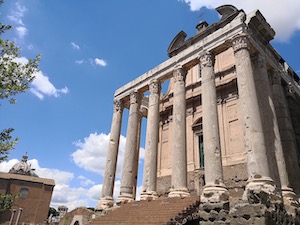 It is the temple that, in 141 AD, the emperor Antoninus Pius had his wife Faustina built after his death, as is also written on the architrave of the facade: DIVAE FAVSTINAE EX S C
On the death of the emperor, the temple was also dedicated to him and a line was added above the existing wording: DIVO ANTONINO ET
The temple consists of a cell preceded by a hexastyle pronaos, with six smooth columns in front and two on the sides, 17 meters high and with Corinthian capitals, above a high podium preceded by a staircase, modernly rebuilt in brick, and in the center of which there are the brick remains of the ancient altar.

The Temple of Vesta 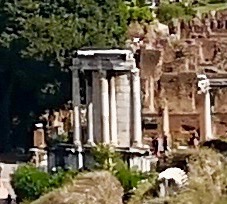 The small round temple along the Via Sacra, next to the three columns of the temple of Càstore and Pòlluce, is the Temple of Vesta which constituted a single religious complex together with the adjacent House of the Vestals.
According to tradition, it was built by Numa Pompilius when the Forum did not yet exist and Rome was still made up of an aggregation of villages on the Palatine Hill.
The temple of Vesta is therefore probably one of the oldest temples in Rome.