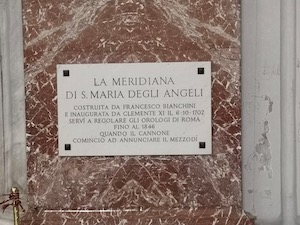 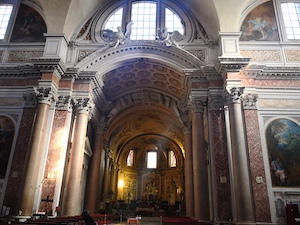 The Basilica of S. Maria degli Angeli e dei Martiri is the church born, inside the Baths of Diocletian, in 1561, by the will of Antonio Lo Duca, a Sicilian priest devoted to the cult of angels, by Michelangelo who had the happy intuition to leave intact the Roman structures of the rectangular hall of the Baths (the Frigidarium )).
It was inaugurated following the papal bull of Pope Pius IV on 27 July 1561 and took the name of “ Beatissimae Virgini et omnium Angelorum et Martyrum .

There are countless Angels hidden inside the basilica among those hidden in the dim light, praised in the paintings, overlooking the edge of the stuccoes. It can happen, even after having crossed the basilica several times, to spot someone who had previously escaped. 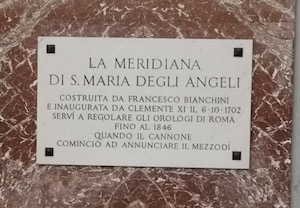 The Sundial was built and inaugurated on 6 October 1702 by Pope Clement XI, with the aim of further verifying the validity of the Gregorian Reform of the Calendar, and also for the purpose of determining the exact date of Easter which, according to the rules given by the Fathers of the Council of Nicaea, must be celebrated on the first Sunday after the Full Moon following the Spring Equinox.

The sundial of S. Maria degli Angeli, or Clemetina Line, consists of two fundamental elements: a large bronze line on the floor oriented exactly from South to North for about 45 meters and a hole at the top from which the sunlight penetrates, called “gnomonic hole”, with a diameter of about 2 cm, that is the thousandth part of its height from the floor (20.34 meters), as was the practice at the time. 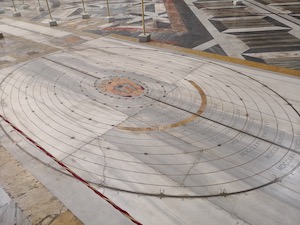 On the right of the line are represented, with inlays of ancient polychrome marbles, the zodiac signs of the summer and autumn constellations while on the left there are those of the spring and winter constellations; Cancer and Capricorn, coinciding with the solstices (summer and winter), are instead placed at the two ends of the sundial.

Unlike the sundials that we sometimes see on the walls of a building where the time is indicated by the shadow of the rod (or “gnomon”) projected on a suitable path, this is a “camera obscura” sundial, and the “time “is indicated by the light of the Sun projected on the Meridian Line through the Gnomonic Hole, at true noon.
Starting from the point closest to the “perpendicular point” to the Summer Solstice, in correspondence with the constellation of Cancer, the image of the Sun runs all the way through the year reaching Capricorn at the Winter Solstice, the furthest point of the sundial and then following the reverse path.