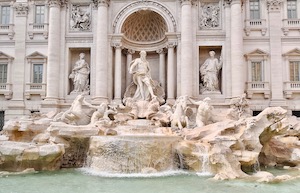 The second most photographed monument in Rome after the Colosseum, Fontana di Trevi is the largest fountain in Rome and one of the most beautiful and famous in the world!

Built on the facade of Palazzo Poli in 1732 by Nicola Salvi, and finished thirty years later by Giuseppe Pannini, the Trevi Fountain probably owes its name to a crossroads of three streets (crossroads) at the height of the current square which from the middle of XII century gave the name of Regio Trivii to the entire district.

The history of the fountain is closely linked to that of the Virgin Aqueduct, the aqueduct that the Emperor Augustus used to bring water from the Salone basin, on the Via Collatina, to the Campo Marzio and feed the thermal baths wanted by Agrippa.
It is the only Roman aqueduct still in operation after two thousand years and today it feeds the fountains of the historic center such as the three fountains of Piazza Navona, the fountain in front of the Pantheon, the Fontana della Barcaccia in Piazza di Spagna, as well as, of course, the The Trevi Fountain. 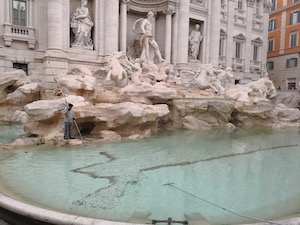 The best known tradition, linked to the Trevi Fountain, is obviously the toss of the coin inside the fountain, from behind and eyes closed, with which a future return to Rome would be propitiated.
The introduction of this custom is attributed to the German archaeologist Wolfgang Helbig who, during his long stay in Rome, was inspired by these ancient rites to lighten the farewell of his guests from the Eternal City.

Then there is the anecdote of the “ Ace of Cups “, the large travertine vase on the parapet to the left of the fountain (so named for its shape that is very reminiscent the symbol depicted on the playing cards).
From the chatter of the time it seems that Salvi had it put in that spot to disturb the view of a barber who had a shop nearby and continued to criticize the architect’s work (actually it has nothing to do with the theme of fountain, nor is there anything similar on the other side).

And how can we forget, in the field of cinema, the famous scene of Anita Exberg and Marcello Mastroianni inside the fountain in Fellini’s La Dolce Vita or the scene of Totòtruffa 62 where Totò sells the fountain to an inexperienced tourist, pretending to be the rightful owner. 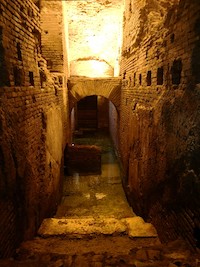 During the renovation of the Trevi Cinema, adjacent to the fountain and one of the historical cinemas of Rome, came to light between 1999 and 2001, the archaeological area called “ City of Water ” and, among the six and nine meters below street level, it is possible to look out over the heart of the “ VII Regio via Lata “, one of the 14 regions into which the emperor Augustus had divided Rome in 7 BC

And you will see the remains of an insula, the typical dwelling of late-republican and imperial Rome, equivalent to the current condominiums, and one of the 18 cisterns present along the urban stretch of the Vergine aqueduct.

It is possible to visit the basement of the Trevi fountain every Tuesday, Thursday and Saturday from 3.00 pm to 7.00 pm and every Wednesday, Friday and Sunday from 10.00 am to 2.00 pm.
Access is located in Vicolo del Puttarello, 25 and you can buy your ticket is online which also includes an audio guide to download and use offline and a 25-minute multimedia video to see at the information point in Piazza dell’Ara Coeli, 16.